I’m a bit reluctant to write down these lines because if I look at myself as a beginner dog owner, my hair stands on end.

The whole story started like with most of us: I have loved animals from an early childhood. I used the posters taken out from a wildlife magazine to decorate my room from wall to wall. I will never forget the clownfish that was over my bed and whenever I looked it at night from down below, from quite an unusual angle, it reminded me a dachshund lying on its back, the long ears hanging down. (Well, if I had a psychiatrist he could tell you more about this, I guess …) I would pester my parents with ideas like I wanted a dog or a cat, so first I got a parrot, then 3 goldhamsters and then a completely wild Siamese cat. But they were not giving in on one thing: no dog!

Time flew by and I myself became a parent. What could be more natural than my own kid longing for a dog? Well, I thought it was time to show the world that I wasn’t as cruel a parent as my own parents in the distant past! If the kid wants a dog, let’s give it to her! (Does this sound familiar?!)  Then we started to look at dog breeds with great enthusiasm, so we could pick out the most suitable one for ourselves. We were looking, reading about their character, guessing which one could be kept in our tiny apartment; is it lovely, is it playful, how does it look, just the usual things. (Does this also sound familiar?) We decided that a Beagle or a Border Terrier would be just perfect for us.

Then I checked out my wallet. Following this, I started to explain to the kid as convincingly as I could that a mixed breed doggy is just as good as a pure breed one. Moreover, it’s much more resistant to illnesses, more kind, more clever, and, most importantly, a lot cheaper. This is the perfect price-value ratio! So, at last, one week before her sixth birthday, we visited the famous flea-market in Pécs. Following quite some brainstorming we had agreed before our visit that the dog’s name would be Kifli. (Kifli means croissant in Hungarian) As said before, on a coldish early February day we walked to the flea-market to look at the puppies for sale. There were not that many left as we were quite late – we didn’t like getting up early -, but it was clear that after all this preparation we couldn’t go home without a dog. This is how it happened that on 9th February 1997, after paying 250 HUF (less than a Euro), I  stuck Kifli into my coat and we took her home.

Well, this is the moment when my life as a dog owner started. Unfortunately, we don’t have a lot of pictures left from these times as we didn’t have a digital camera but I will introduce Kifli to you, who we had so many adventures with.

But before I start telling you all the stories I’d like to share with you that since then many people have asked me a question: “My kid wants a dog, what breed do you recommend?” It’s supposedly not too polite to answer a question with another question but in these cases I’m always extremely impolite and ask: “And you? Would you like a dog, too?!”, and then I go on: “Because if your answer is no, then I recommend you to forget about the whole thing!” Why? You can learn from the following episodes. 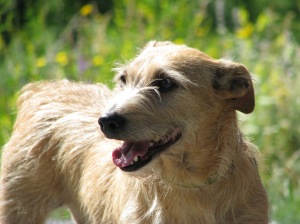 Kifli is 11 years old in this picture. Could you have guessed?

I’m totally sure about one thing: Kifli, bought for less than a Euro, was the cheapest, and at the same time the most expensive gift I have ever given. But without any doubt the most valuable one!